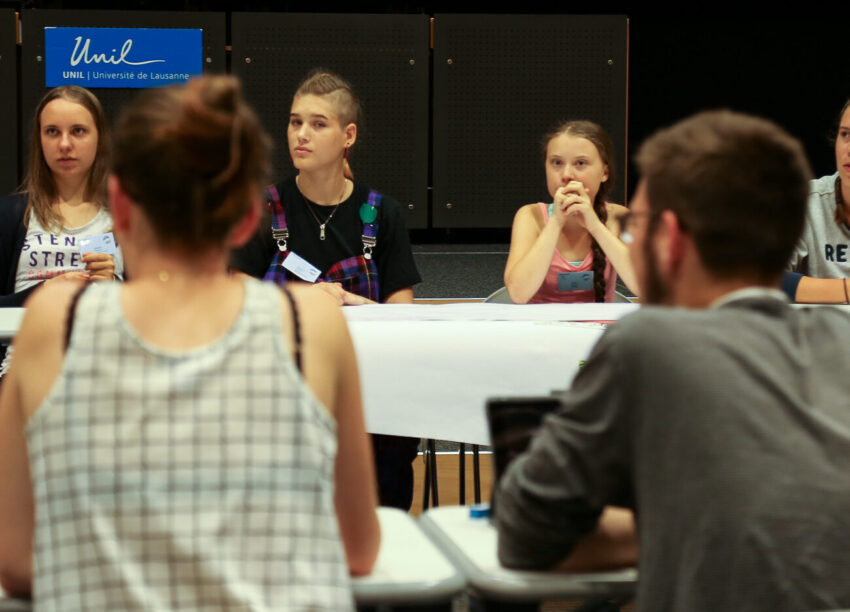 This story was featured by NBC News

LAUSANNE, Switzerland — It was the floodwaters brushing her jawline that convinced Theresa Sebastian it was time to get serious about climate change.

The teen from Ireland was in Kerala, India, for a family wedding last summer when the region experienced 40 percent higher-than-average rainfall. More than 480 people died in the torrential rains that swept away cars and destroyed more than 20,000 homes.

“My whole entire life could have ended there,” Sebastian, 15, said, maintaining eye contact through her black-rimmed glasses while pointedly recounting the terrifying experience.“I knew about global warming, but I didn’t think it would affect me so soon.”

While scientists have not definitively linked the Kerala flood to climate change, a recent study cautioned that the disaster was a sign of things to come as global warming reaches the 2.7-degree Fahrenheit threshold.

Fridays for Future has eclipsed the quiet, solitary protests started by its founder, 16-year-old Swede Greta Thunberg, in August 2018. Now upward of 2 million supporters from The Hague to Kampala, Uganda, regularly skip class on Friday and take to the streets to protest government inaction on climate change.

Sebastian was among some 450 teen strikers from 38 countries who gathered in Lausanne on the banks of Lake Geneva last month to figure out how to get the world to act now.

Donning sundresses or sensible jeans and T-shirts, or rocking eye-catching hairdos in bright blues, greens and pinks, the girls were as diverse as their countries of origin. But they had found commonality in fighting climate change.

Experts say it is not unprecedented for women to play central roles in social and environmental movements — particularly when it comes to issues that affect health and home.

What is different this time around is just how young many female participants are, said Sherilyn MacGregor, a researcher specializing in environmental politics at the University of Manchester in England.

“It’s children speaking for themselves,” she said. “This moment in history where we have this rising of girls in the climate movement I think is really significant and exciting and… is going to change how we look at this generation of young women.”

Thunberg may have been the voice to rally them, but these young women are quick to cite others figures as role models.

Ariadne Papatheodorou of Athens said she looks up to her mother, Katerina Harvati, a prominent paleoanthropologist.

“I find it really inspiring just seeing other powerful women in powerful positions getting what they deserve because they worked really hard for it,” said Papatheodorou, a tall, outspoken 15-year-old who dreams of studying biochemistry and business.

Peers on Papatheodorou’s basketball team — some of whom were drafted to Greece’s national team — are another source of strength, having taught her about teamwork, she said.

Isabelle Axelsson,18, who has protested in Stockholm alongside Thunberg since December, said she understands why her friend has become a figurehead, although she says she sees her as more of a “catalyst.”

Axelsson, her head half shaved and wearing a red paperclip as an earring, said the movement has attracted many on the margins of society, those facing discriminated against their sexual orientation, disabilities or other characteristics.

“I think it’s easier for people who are already outside society to take a stand,” said Axelsson, who like Thunberg has autism. This could apply to young women who feel they have to fight to be heard, she added.

The issue of climate change also appeals to teens who fight for other causes because they say its consequences will undermine social progress of all kinds.

Papatheodorou said the climate change movement is more broadly about human survival — a topic she is well-versed in. She volunteers with refugees who have made the harrowing journey across the Mediterranean to reach Greece.

“I was born in a household with privileges. I have a house, I have food, I have water, I can go to a good school,” she said. “We’re obliged as privileged people to help them.”

Papatheodorou does all this envisioning a better world for everyone — a sentiment included in the Fridays for Future declaration crafted by her peers in Lausanne.

Varja Čučulović, 18, a Slovenian organizer, opened the summit outlining participants’ values of peace, equality and care not only for the environment but for their physical and mental health. Despite speaking different languages and reflecting a spectrum of political views, debate over their visions for the movement was respectful, although there were some eye rolls during the more contentious moments.

The way they interact is essential for the strikers. They are leaderless, having rejected a hierarchical structure to instead make decisions by consensus. Spread out across the planet, they coordinate their weekly marches online but decide on the fine details at the local level, causing some variations in their demands and actions.

A small team of about two dozen worked on a list of 33 proposed demands during the summit, but struggled to agree on a detailed global plan of action. Some wanted specific proposals for governments to adopt, such as expanding train services, while others said solutions to the climate crisis should be left to the experts. The frustration prompted some to break down in tears.

“We have discovered that we have differences,” the group said in a statement at the end of the conference.

But after long and sometimes tortuous discussion — eased by frequent hugs — the group decided to stick to their simple rallying cry of preventing the planet’s temperature from rising beyond 2.7 degrees, while also calling for governments to accept the best science available and ensure justice and equity for all as humanity adapts to the changing climate.

Their next step is to launch “the largest climate strike mobilization in history,” with students and their supporters protesting around the world on Sept. 20 — a day before a U.N. youth summit on climate change in New York, with additional marches throughout the week as world leaders meet over the issue.

The teens are no longer marching alone.

One of Germany’s largest trade unions vowed to join the students’ global strike on Sept. 20, while Britain’s Trade Union Congress urged its 5.5 million members to also join in. Amnesty International has called on more than 30,000 schools around the world where strikes are planned to allow children to take part.

“It’s not just a fad,” said Anja Kollmuss, 52, a scientist and policy analyst for the Stockholm Environment Institute, who was advising the teens in Lausanne.

In the two decades she’s spent working in climate policy, watching “the window for having a safe future close,” Kollmuss sees the attention youth have brought to the issue as a game changer.

The public has gone from perceiving global warming as a problem related to air conditioning to a complex scientific phenomenon resulting from human behavior, she said.

Climate emergencies have been declared by governments around the world, including in Scotland, Canada and parts of Australia, in response to growing public outrage over the issue.

Their goals may seem unrealistic given how slow national and international policies have been instituted to respond to the crisis, she added. But critics who call the teens naïve or their task too difficult should not dissuade the new generation of environmentalists.

“That’s what we need young people for, to really fight for ideals and fight for a better world,” Kollmuss said.