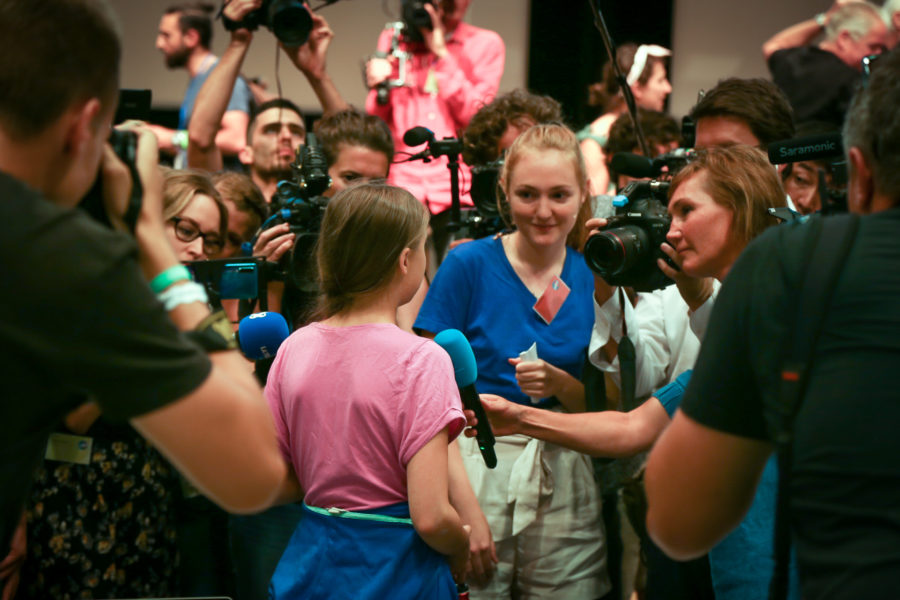 LAUSANNE, Switzerland ⁠— Staring through a swarm of photographers and television crews, self-described introvert Greta Thunberg took the stage at a Swiss university last week to pointedly reiterate a message that has captured the attention of leaders and like-minded young women around the globe: The world must take drastic action now to avert ecological and civilizational collapse.

“We know that our future is at risk,” the small, soft-spoken 16-year-old Swede tells journalists at the start of a weeklong youth summit at the University of Lausanne. “We would love to go back to school and continue with our everyday lives, but as crucial as this situation is, as serious as this situation is, we feel like we must do something about this now.”

Thunberg — whose central point is that humanity must immediately reduce greenhouse gas emissions that have unrelentingly increased since the start of the industrial revolution, resulting in global warming — is the driving force behind a movement that has seen more than 2 million teens around the world take part in Fridays for Future school strikes against climate change.

On Wednesday, she set off from Britain’s shores on a monthslong journey — she is sailing to avoid flying — that will take her to a U.N. summit on climate change in New York in September, and the COP25 conference in Santiago, Chile, in December.

Her face and signature brown braid have become recognizable the world over. She told NBC News that her newfound status as an icon for those clamoring for action to prevent mass extinction, coastal cities from being engulfed by rising seas, and food and drinking water shortages has taken her by surprise.

“I don’t think anyone saw this coming, least of all me,” said Thunberg, who has appeared on the covers of newspapers and magazines, the latest being GQ.

Her current role in the spotlight marks a drastic shift from the crippling depression she fell into around the age of 11 which left her not eating much or speaking, as reported by The Guardian and the New York Times. Turning her worries — including climate change which she’s recalled learning about around the age of eight — has given her a newfound purpose.

“Instead of worrying about how that future might turn out, I’m going to try to change that future while I still can,” she told NBC News in an interview in February.

The movement began in August 2018 when Thunberg began skipping class to sit outside Sweden’s Parliament, holding placards saying climate change had reached a crisis point. She came up with the idea while speaking with like-minded peers who were inspired by students in Parkland, Florida, who walked out of their classrooms in protest of the lack of action on gun control after a shooting there left 17 people dead in February 2018.

Her quiet and solitary demonstration quickly caught the attention of her peers and the media, and morphed into mass weekly classroom walkouts that halted traffic in cities from London to Melbourne.

Now, Thunberg is one voice among many in the predominantly female-led movement. While she spoke to reporters last week, 450 other Fridays for Future organizers from 38 countries gathered at the summit here to share ideas on how to spread the word, with hopes of changing the course of history.

The group crafted a declaration outlining their core demand that governments and world leaders keep the global temperature from rising more than 2.7 degrees above pre-industrial levels — the benchmark set last year in a special report by the Intergovernmental Panel on Climate Change to avoid devastating consequences for the planet by the end of the century.

According to organizers, around 60 percent of the young leaders at the summit organized by members of Friday for Future are girls. Costs were covered largely by donations from the hosting university and Lausanne, as well as charitable groups including the philanthropic organizations Fondation de France and the Swiss-based Charles Léopold Mayer Foundation.

Thunberg’s new bully pulpit is a blessing, given her convictions, but also a bit of a curse. Thunberg has autism, so boisterous press conferences and small talk with strangers can feel overwhelming and draining, she said.

Apart from the start of the summit, she spent the week out of the limelight, and instead focused on quiet interactions with peers and evenings with her father, Svante Thunberg, an actor and arts manager. Her mother, Malena Ernman, and her younger sister remained home in Stockholm.

“We are, in a way, changing the political debate and how people see the climate and ecological emergency.”

Thunberg said she doesn’t understand the scope of the school strikes and why the issue has resonated with so many young women.

“I don’t see myself as a role model — it’s a position I didn’t aspire to being,” Thunberg said. “I’ve never been normal. I’ve never had, like, close friends to hang out with in my spare time. I always just been home, by myself, reading or whatever. So I don’t know how a normal teenager behaves.”

She may not know how a child her age is supposed to behave, but Thunberg has caught the attention of many adults. During the United Nations’ COP24 conference in Katowice, Poland, in December, she excoriated the officials there and by extension the leaders who sent them.

“You only speak of green eternal economic growth because you are too scared of being unpopular. You only talk about moving forward with the same bad ideas that got us into this mess, even when the only sensible thing to do is pull the emergency brake,” Thunberg told those assembled in a quiet, steely voice. “You are not mature enough to tell it like is. Even that burden you leave to us children. But I don’t care about being popular. I care about climate justice and the living planet.”

“We have come here to let you know that change is coming, whether you like it or not. The real power belongs to the people,” she added.

Her newfound fame has made her a target, too.

Thunberg has been repeatedly attacked by high-profile commentators and politicians. On Thursday, Arron Banks, a British businessman and co-founder of a campaign supporting the U.K.’s exit from the European Union, mocked her decision to sail to New York, tweeting: “Freak yachting accidents do happen in August …” A number of French right-wing politicians boycotted her speech in the country’s National Assembly in July, saying they didn’t need to hear from “the prophetess in shorts.”

An Australian columnist, Andrew Bolt, called her “the deeply disturbed messiah of the global warming movement” and referred to her followers as a “cult.”

“Yeah, I’m very dangerous,” she said with a small smile at a press conference. “All we are doing is communicating and acting on the science, and I don’t understand what is so dangerous with that.”

She later told NBC News that she sees the attacks, which range from death threats to criticism of her and the strikers’ appearance, abilities and families, as a sign that the other side has run out of facts to contradict the reality of the climate crisis.

“That proves we’re winning, because they’ve got nothing else to say,” she said. “They don’t have any arguments because they have to attack us personally.”

“There is a way to get your voice heard without shouting very loud,” she added.

While she has accumulated opponents, she’s also earned a long list of supporters from Pope Francis to U.N. Secretary-General Antonio Guterres to Rep. Alexandria Ocasio-Cortez, D-N.Y.

“We are, in a way, changing the political debate,” Thunberg said, “and how people see the climate and ecological emergency.”

For Thunberg, however, the debate will not be over until global greenhouse gas emissions actually decline.

“I can’t be proud of something until that has been achieved,” she said