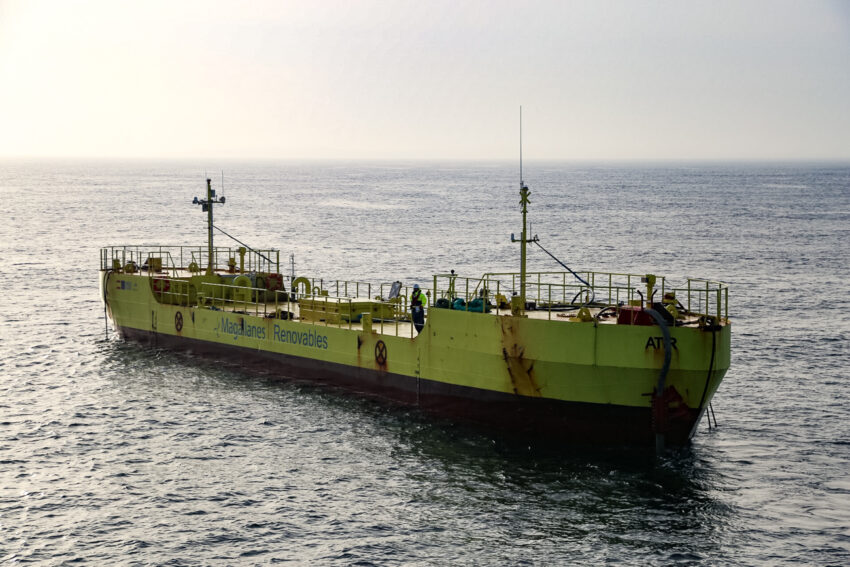 This story was featured by NBC News

KIRKWALL, Scotland — Huddled inside what looks like a tanker ship anchored about two miles from shore, engineers from the Spanish company Magallanes Renovables monitor two giant rotors below the hull — but instead of driving the vessel, the rotors are capturing energy from the shifting tides.

Here in the Orkney Islands, an archipelago north of mainland Scotland where the Atlantic Ocean and the North Sea meet to generate strong tides, Magallanes Renovables is one of several companies testing devices that could help tidal power systems spread around the globe. The systems work by converting energy from shifting currents into electricity.

“Does it work? Damn right it works. We’ve proven that bit,” said Neil Kermode, managing director of the European Marine Energy Center, a nonprofit research hub in Orkney. “It is very much now a case of deploying the kits we’ve got, and in the act of doing it … it’ll get better.”

Tidal energy is an attractive resource in part because of its reliability. Unlike other renewable energy sources, like wind and solar, it’s predictable even years in advance, Kermode said. Tidal power won’t replace other forms of renewable energy but will supplement them, reducing the risk of outages when one source falters, he added.

The center, established in 2003, was the first such facility in the world. It manages test sites across Orkney, providing tools and infrastructure — such as subsea cables connecting to the area’s power grid — for companies working to develop durable, cost-effective tools for harnessing tidal energy.

Both the physical environment and broader energy market pose challenges for the growth of tidal power.

Specialized vessels and construction equipment are needed to deploy tide-harnessing devices in rough seas; submerged components must be able to withstand salty, fast-moving ocean waters as well as the growth of barnacles and other marine organisms.

Once a device passes the physical tests, it has to prove itself in the market. To attract investors, tidal power must be cost-competitive with other, more well-established sources of renewable energy — such as offshore wind, which has seen significant growth in recent years.

The world’s largest tidal array, designed by the U.K.-based company Simec Atlantis Energy, is already feeding into Scotland’s power grid from the strait between Orkney and the mainland. Its four turbines stand like windmills on the seafloor and spin slowly in the moving water at about seven to 14 revolutions per minute, said Timothy Cornelius, Simec Atlantis Energy’s CEO.

With blades up to 65 feet in diameter, the turbines generate more than 10,000-megawatt hours of energy — enough to power nearly 2,600 homes. When two more turbines are added by the end of 2020, the array should be able to power an additional 4,000 homes. Longer-term plans call for the array to expand to 40 turbines.

While Atlantis is proving that tidal energy works, other companies are developing new devices they hope will be even more effective.

In the Fall of Warness, a channel within the Orkney Islands where water currents can reach 7.8 knots, Magallanes Renovables is testing tidal energy turbines that are anchored not on the seafloor but on the underside of a floating platform.

By positioning the turbines near the surface rather than hundreds of feet below it, the design allows for lower installation and maintenance costs, Marques said.

Magallanes isn’t the only company working with barge-mounted tidal energy turbines. The Scottish company Orbital Marine Power successfully tested a floating device that generated more than 3 gigawatt hours — enough to power 830 homes. Orbital Marine CEO Andrew Scott said that next year the company plans to test a system that could generate twice as much electricity.

Global energy consumption rose by 2.1 percent in 2017 and shows no signs of slowing down. At the same time, investments in renewables exceeded $200 billion worldwide, according to a 2018 UN Environment report.

“I think there is a revolution that is starting in the wider energy space beyond electricity power production, and I think it will only strengthen the demand for renewable energy,” Scott said. “And within that demand, tidal has an important role to play.”