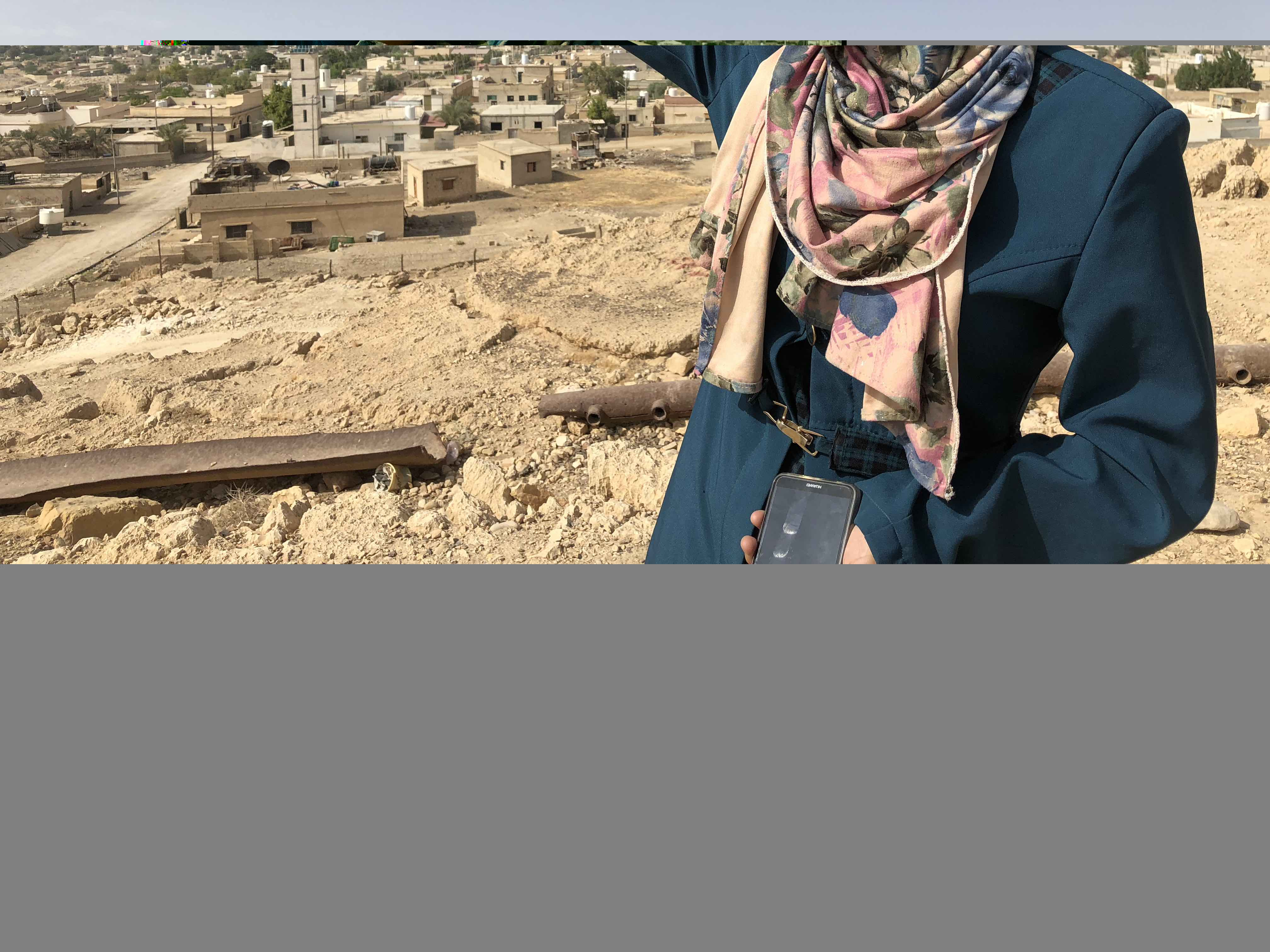 NORTH SHUNA, Jordan — A lush tract of land known as the Island of Peace has thrived in a sea of strife for the past quarter-century, its palm fields and date plantations a stark contrast to the Middle East’s arid conditions and tumultuous politics.

But now the symbol of coexistence shared by Israel and Jordan is falling victim to tensions between the neighbors — with the dispute highlighting the crucial role access to water plays in a volatile region.

Jordan’s King Abdullah II announced last week that Israeli farmers would no longer be able to lease the land, which is nestled among rolling golden hills on the border — just six miles south of the Sea of Galilee and 62 miles north of the Dead Sea.

Israel’s agriculture minister fired back, threatening to reduce the water it shares with its neighbor.

Dams and diversions installed upstream have left the Jordan River that divides the countries as little more than a trickle. The remaining flow snakes through the Island of Peace.

The 1994 agreement with Jordan that created the Island of Peace has been a rare bright spot in Israel’s historically tortuous relations with Arab countries.

“If we don’t cooperate in water, it’s difficult to cooperate in other things,” Ali Subah, the general secretary of Jordan’s ministry of water and irrigation, told NBC News before the king’s announcement.

Access to water is a huge issue across the Middle East, where typically dry conditions, population growth, poor infrastructure and war have strained the little available water — at times sparking unrest. Protests linked to water have broken out in Iraq and Iran, and some experts have linked the Arab Spring uprisings to instability caused by droughts and heat waves.

The 2014 U.S. Quadrennial Defense Review flagged climate change as a security threat that would encourage “conditions that can enable terrorist activity and other forms of violence.”

In addition to Israel, Jordan is surrounded by Syria, Iraq, Saudi Arabia and the West Bank.

Jordan is one of the most water-poor countries in the world, and under rationing, home water tanks are filled weekly.

The Island of Peace was a compromise enshrined in the 1994 deal that ended decades of an official state of war between Jordan and Israel — which also included a water-sharing component. Optimism over the Palestinian-Israeli conflict was running high, and at the time the treaty served as “a phenomenal example” of how “mutual understandings” could be found in the conflict-ridden region, according to Aaron Wolf, a geography professor at Oregon State University.

While the Jordan-Israel pact shows that governments will “talk about water when they won’t talk about anything else,” Wolf added that debates about how to share the precious resource can “exacerbate existing tensions.”

The “amount of death and destruction” linked to water crises — which range from violent disputes to the spread of disease to famine — is on par with the toll from malaria and HIV/AIDS and “almost bigger than all the wars in any given year put together,” according to Wolf.

Rain and fresh water resources heed no borders. Prolonged droughts and shifts in precipitation patterns are now exacerbating the issue throughout the region.

Across Jordan’s border in Iraq, the implications of not having access to water were highlighted when at least a dozen people were killed in protests that broke out in the oil-rich southern province of Basra earlier this year after 102,000 people fell ill due to an unclean supply.

Rainfall has decreased in the south and western parts of the country in the past seven decades. Hassan Janabi, a former Iraqi minister of water resources, told NBC News that inflows through the Tigris and Euphrates river systems — the area known as the “cradle of civilization” — have dropped by 60 percent since the 1970s. That has taken a toll on agriculture, which supports one-third of the country’s 32 million people living in rural communities.

“This year I could not plant at all,” said Ali Sagban, a rice farmer in the southern province of Najaf whose farm has faced water shortages for the last five years. “We used to live unsafe lives because of explosions, now we are living without water.”

Another major force behind the decline in water to Iraq is development in upstream Turkey, which has built five dams on the Euphrates since the 1960s. That’s cut the flow to Iraq more than in half, Janabi said.

“When you have these social demonstrations, protests, upheavals … it is dangerous for the country and dangerous for the region,” Janabi warned, referring to the unrest linked to the illnesses. “People are very, very angry.”

Rivers will shrink even more as the imminent filling of Turkey’s newest dam, the Ilisu, will cut flows of the Tigris into Iraq further.

Turkey complied with Iraq’s requests to postpone the filling of the dam in June due to the dry conditions, but the project designed to generate electricity for the country will eventually move ahead.

Turkey insists it is determined not to cause significant harm to its neighbors and is committed to managing water in a way that benefits everyone.

Many Iraqis blame their own government, not Turkey, for not acting sooner to secure water for the future. Construction of the Ilisu dam began in 2006.

The government is “paying no attention to what we are suffering from,” said Rashid Abbas, a corn farmer in the province of Babylon, south of Baghdad. Abbas was among many farmers who led peaceful demonstrations after prolonged drought and the withdrawal of government water for irrigation made planting staple crops impossible this year.

“There was a rumor that the protests are the first step of an uprising,” said Abbas, adding that many local people fear another year of dry conditions could affect the availability of drinking water.

Syria’s seven-year civil war is also seen by some experts as an example of how water shortages can worsen already tense circumstances. Drought didn’t spark the conflict but it did push many unemployed farmers into cities where poverty and frustration encouraged some people to extreme action, Oregon State University’s Wolf said.

The effects of that war has been felt in neighboring countries, including Jordan, that now struggle to support the millions of refugees that put more pressure on resources. Conflict also halts any potential for negotiating water-sharing deals or building shared infrastructure.

“If there is not enough water for people to drink or cultivate crops in the Middle East, and that’s a big concern, those people may need to leave the areas where they live and that could lead to destabilizing migration. It could also lead to an escalation of violent protests,” said Charles Iceland, director of global and national water initiatives at the World Resources Institute.

Iceland pointed to Iran as a particularly vulnerable country for escalating incidents in the future if supplies are reduced by climate conditions or upstream countries.

But that doesn’t mean that the pressure on water resources has been eliminated. Israel, like Jordan, faces problems ranging from overconsumption to heavy pollution.

Wolf, who specializes in transboundary water conflicts, believes the political rhetoric between Jordan and Israel is typical chest-thumping ahead of negotiations over the Island of Peace and not a sign that the overall treaty is at risk.

“I think at the end of the day they will sit down,” he said. “There is no way out except to cooperate.”

However, others are not so certain.

Yana Abu Taleb, deputy director of EcoPeace Middle East, an NGO that works with both governments as well as as Palestinian authorities, said the recent political discourse is unsettling. She worries it could be a signal that leaders are changing their approach.

While King Abdullah’s move lines up with public animosity toward Israel, Abu Taleb said many Jordanians don’t understand how complex the country’s water challenges are and how the peace treaty is integral in resolving them.

Even before Israel threatened last week to cut the amount of water it shares, rising tensions could already be seen in communities in Jordan.

Neighbors in a once close-knit farming town of Al Karameh quarreled one recent morning after the taps in their homes ran dry.

“All people need water to drink, to wash,” said Roshka Tayyem, a politician, before getting sucked into the heated argument in the middle of the road.

Tayyem’s house didn’t receive its weekly water supply, so her brothers decided to take matters into their own hands.

But as they attempted to fix the exposed pipes at the street corner, some neighbors assumed that Tayyem’s brothers had caused the problem in the first place. Soon everyone was launching insults.

Bassam Salim Rashaydeh, 49, a farmer, said he had to leave his field uncultivated this year because he doesn’t have the water needed for irrigation.

“Farming has been executed here,” he said.

» The Dead Sea is dying. A $1.5 billion plan aims to resurrect it.
» Jordan to drill ‘fossil water’ wells a half-mile underground
» Mideast farmers who use pesticides often find no buyers abroad