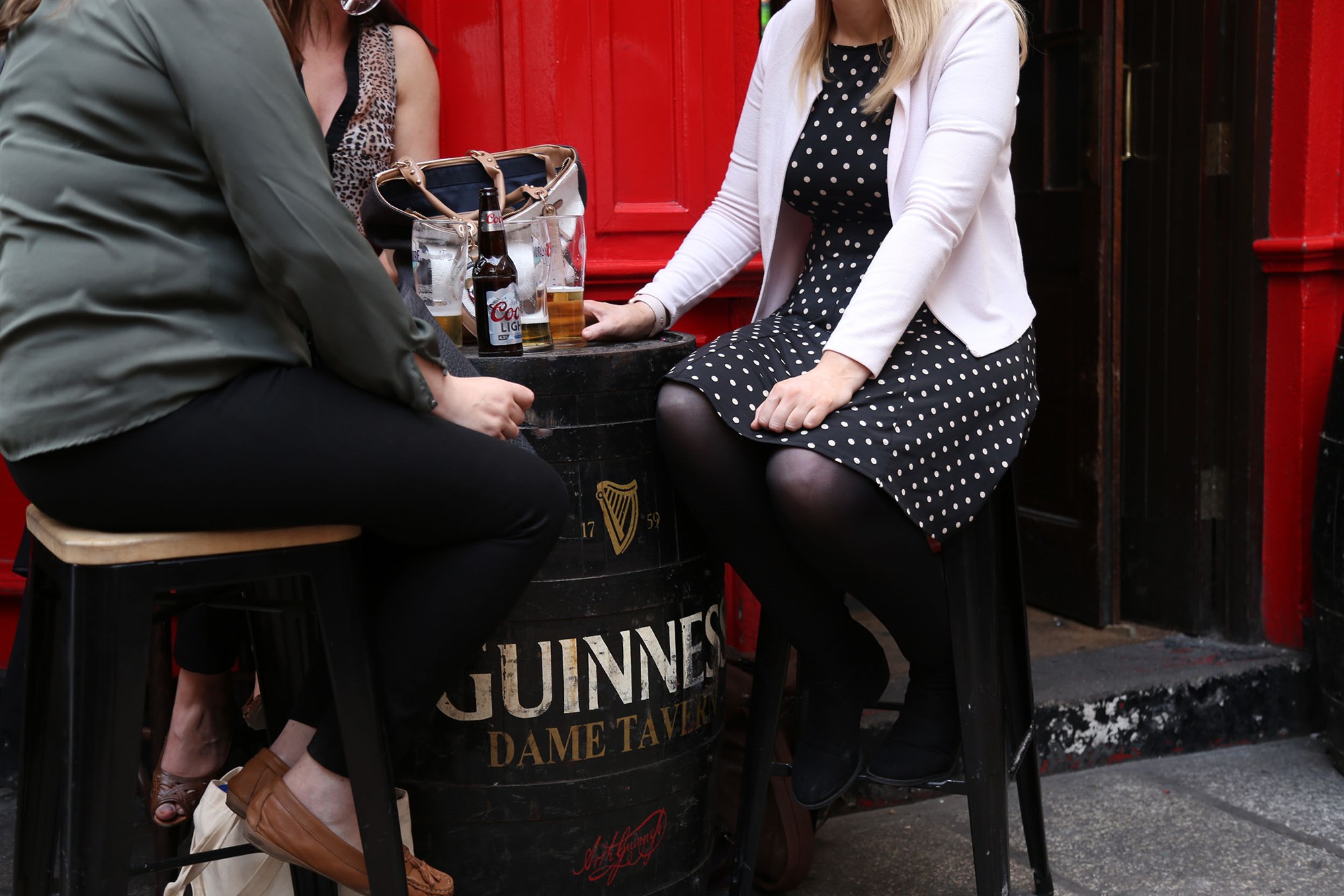 DUBLIN — Doctors in Ireland were once known to recommend a pint of Guinness as a source of iron for pregnant or nursing women.

While that advice has been discredited, drinking remains so ingrained in Irish culture that many women still feel that swapping a beer or cocktail for something nonalcoholic at a social gathering isn’t an option.

That has ramifications for expectant mothers: A 2017 study found that 60.4 percent of Irish women consume alcohol at some point while pregnant.

The consequences of such behavior on fetuses has prompted a plan to introduce a specific urine test for mothers-to-be to help doctors intervene when dealing with pregnant patients who drink.

“There is a lot of public and professional denial,” said Dr. Mary O’Mahony, a specialist in public health medicine for Irish Health Service Executive, who proposed the alcohol screening program. “We need to make not drinking during pregnancy an easier choice, and it will take a whole societal change in how we view alcohol.”

Ireland has one of the world’s highest rates of FASD — with an estimated 4.75 percent of children being affected. Only South Africa (11.1 percent) and Croatia (5.3 percent) outrank it.

However, experts say many cases go undiagnosed in countries around the planet.

‘IT’S THE WAY THE IRISH DRINK’

Sitting on a patio on a recent sunny evening, Mary Anne Stritch was having a post-work drink with three colleagues at a popular Dublin cocktail bar.

She highlighted the role that Ireland’s drinking culture plays in the daily life of young women.

“I know people who will consciously drink on a night out so that people won’t assume they’re pregnant,” said Stritch, 24. “Even if they’ll only have one or two in the night, (it’s) to keep the rumors away.”

The four women said there were mixed messages around the issue of drinking during pregnancy.

Beriwan Ceren, 22, who was visiting from London, said she’d read online that having an occasional drink while pregnant wasn’t harmful.

Dearbhla Boyle, 23, said she assumed abstention was best but could imagine women running into problems drinking during the first trimester before they realized they were pregnant.

“I think it’s the way the Irish drink as well,” Boyle said. “If someone isn’t going out or drinking on a night out, everyone is like, ‘Oh, what’s wrong?’”

Outside The Dame Tavern, Paula Kennedy noted the ignorance of previous generations to the effects of alcohol on a fetus, adding that her mother didn’t change her habits during pregnancy.

“My sister was very unwell and I was born premature as well,” said Kennedy, 36. “Without having a doctor’s report on it, I would say my sense of it was because she smoked and drank with us that that happened.”

Doctors are also contributing to the confusion. A survey of Irish pediatricians found one-third of them were unaware of the existence of FASD and 17.3 percent believed mild alcohol intake in the third trimester is safe.

Dr. Kieran O’Malley, a Belfast-based psychiatrist who has written extensively about the disorders, said some doctors across the border in Ireland simply don’t believe that FASD exists.

“That’s why I treat it as the last taboo. I think alcohol is so interwoven into our society it’s hard to know where to begin,” he said.

O’Malley said the “level of transgenerational alcohol brain injuries is astounding” in Ireland, adding that “nobody knows about it.”

Public health specialist O’Mahony agreed that “conflicting advice is being given all over.”

FASD does not necessarily hit the poor harder, O’Mahony said. Wealthier women who can afford expensive wine or spirits with dinner at home are also at risk of having a child with FASD. And it doesn’t necessarily require drinking at what are considered problem levels. “Alcohol and damage from alcohol doesn’t discriminate by socioeconomic group,” she said.

Part of the confusion, O’Mahony said, stems from the lack of research showing precisely how many drinks it takes to damage a fetus.

A study on the global rates of FASD published last year in The Lancet found that for every 67 women who drank in pregnancy, at least one child was born with the most severe form of the disorder — Fetal Alcohol Syndrome — while nine or 10 others were born with symptoms on the spectrum.

Body type, nutrition, other health conditions and even genetics can affect how the body metabolizes alcohol, and in turn how it affects a fetus. The high risk of having irreversible effects on a child is why many medical authorities, including the Centers for Disease Control and Prevention (CDC), recommend no alcohol intake in pregnancy.

Ireland’s national statistics office says annual consumption in 2016 was 3.03 gallons of pure alcohol per capita. Considering an estimated 20 percent of the population doesn’t drink at all, it raises the average for the drinking population to over 3.7 gallons annually. In comparison, per capita consumption in the U.S. in 2016 was 2.59 gallons.

What sets FASD apart from other cognitive disorders is the impact on the brain’s ability to understand cause and effect. Children and adults with FASD struggle to learn from consequences as a result of the prenatal alcohol exposure.

Gerry said his foster daughter was smart and an articulate and engaging speaker as a child, but her logic was different and she lacked the adaptive behavior skills needed to manage abstract concepts like money.

The impact of not getting the right support in school is among the reasons why Gerry targets educators in his awareness-raising about FASD.

Last month, he ran a workshop for the Education Training Board for the county of Donegal. Many of the special-needs assistants attending the workshop said they could think of children in their schools who most likely have the disorder but have other diagnoses such as ADHD.

The educators said understanding the condition will allow them to adapt how they address children they suspect of having FASD by being clearer with instructions, breaking them down into smaller steps, and understanding that consequences are not an effective approach to disciplining bad behavior.

“Fixing the environment is easier than fixing the kid,” Gerry told them since brain damage caused by prenatal alcohol exposure cannot be reversed.

‘NO USE CRYING OVER SPILLED MILK’

The pregnancy screening test proposed by O’Mahony this year is aimed at reducing the likelihood for FASD — or at least the most severe forms of the disorder — and was supported by the Irish Medical Organization.

The test would be done on a urine sample provided by a pregnant woman to her doctor, which is already part of routine checkups. O’Mahony explained it wouldn’t look for alcohol, which leaves the body soon after consumption, but a metabolite that lingers for up to five days after alcohol is consumed.

The test would be voluntary. A pilot project, which officials hope to launch in the next year, would determine whether women are receptive to the idea and ensure the results were accurate.

People with Fetal Alcohol Syndrome have a life expectancy of only 34 years, with the leading cause of death being suicide, according to a 2016 study in Canada. They are also over-represented in prisons and research from Canada estimated that youths with FASD are 19 times more likely to be incarcerated than those without the disorder.

For the children and adults already living with the disorder, Gerry said one of their biggest challenges is not knowing they have FASD.

Diagnosing FASD can be difficult because the symptoms overlap with other disorders, and it requires a team of five specialists working with a patient to determine a result. There is no dedicated diagnostic service for FASD in Ireland, and there is only one clinic in England offering the service.

Gerry said that for his children, the FASD diagnosis made all the difference and allowed them to get the appropriate support.

“When someone gets a diagnosis, they can understand how they’re different and as they grow up they’re able to advocate for themselves,” he said. “It’s no different than a child with cerebral palsy in a wheelchair — you have to build a ramp.”

But O’Mahony believes prevention — as opposed to diagnostic services — is the best place to invest.

“When a child is born with Fetal Alcohol Syndrome or Fetal Alcohol Spectrum Disorder, the horse has bolted. There is no use closing the gate at that stage, no use crying over spilled milk,” she said.

There are signs that Ireland’s culture around alcohol is shifting. The federal government has been debating a sweeping alcohol bill that addresses a number of health-related concerns, including the link to cancers and accidents, by proposing label warnings.

Proponents of the bill, which includes minimum unit pricing similar to the system approved by Scotland last year, are hopeful it will become law later this year.

Debate around the bill has also raised the issue of drinking itself among the public.

“They’re beginning to realize you get more than a hangover from drinking,” said Siobhan Creaton, head of public affairs for the Royal College of Physicians of Ireland.

Sept. 9 is International FASD Awareness Day, which was started by Canadian and American parents in 1999 to shed light on the disorder.