This piece was also featured in: The Georgia Straight

Our health-care system could soon be feeling the pinch.

[dropcap]M[/dropcap]ore seniors, chronic illnesses, and tighter budgets will add up to mounting pressure on health services in the coming years — but this might not be cause for alarm.

“Just because it’s complicated doesn’t mean there isn’t a solution,” Dr. William Cunningham, president of Doctors of B.C., said in a phone interview with the Georgia Straight.

Each year, the B.C. government spends almost $17 billion, or 42 percent of its budget, on health care — a rate similar to those of other provinces. Yet health-care spending isn’t skyrocketing like it used to be. The province started putting the brakes on increases to health funding in 2009 to keep the bill manageable. 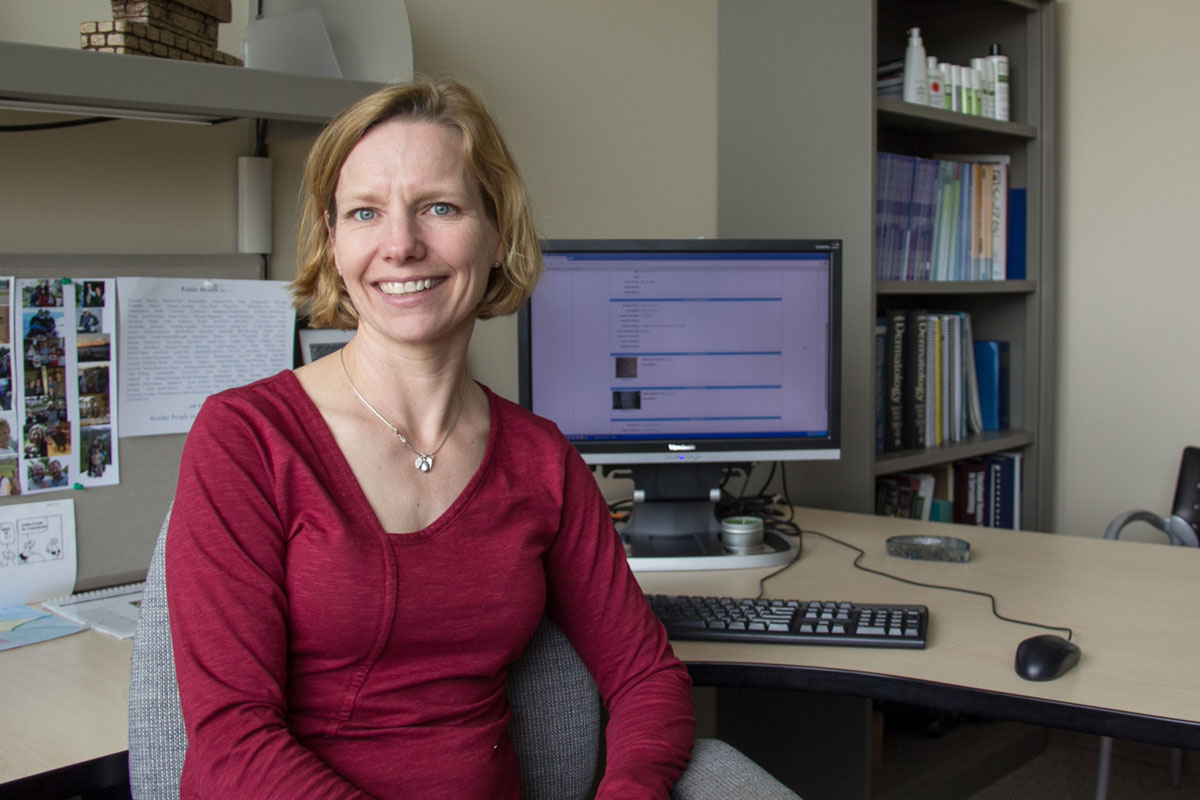 | IMAGE: At B.C. Children’s Hospital, Dr. Wingfield Rehmus practices teledermatology allowing her to connect with patients in remote communities without anyone needing to travel.

That doesn’t mean demand has slowed. The largest generation, the baby boomers, began reaching the age of retirement in 2011. In the next two decades, about 10 million boomers in this country will become seniors and develop some of the health-care needs that come with aging.

Despite the challenges, Cunningham and others in the field say good-quality health services will be maintained because of changes already under way — including advancements in technology.

At B.C. Children’s Hospital, Dr. Wingfield Rehmus is one of many dermatologists who’s now able to see patients across the province without anyone needing to leave their community.

With dermatologists in short supply in B.C. — especially in rural communities — Rehmus said the online solution of teledermatology is improving access for patients.

It works through live video conferencing (similar to Skype) or, more commonly, a store-and-forward system similar to Dropbox. Through store-and-forward, a general practitioner can create a patient file, take photos of a patient’s skin condition, and upload the information to a server where a dermatologist can then find, open, and review the case.

Store-and-forward is more popular than teledermatology because the dermatologist, patient, and general practitioner don’t have to coordinate their schedules. Video-conferencing tools, which can be expensive, aren’t necessary with store-and-forward, and it doesn’t require top Internet speeds.

It may not be the same as seeing a patient in person, but for many minor ailments, such as rashes or acne, it’s effective.

“For those that can’t get here, it’s a really powerful tool to add to the conversation about their care and to provide education to GPs in the community,” Rehmus said at her Vancouver office.

Besides reducing the need for patients in remote communities to travel, advances in technology — particularly in digital photography — have helped dermatologists better monitor and treat conditions.

“It used to be that you only could see with your eyes what walked into clinic,” she said, “but with digital photography we get to see what it looked like many days before it came to clinic because they [patients] are taking pictures on their own.”

Having doctors such as Rehmus “see” patients digitally is not the only solution created by new technologies.

Better screening methods for early detection of diseases such as breast and colon cancers have improved survival rates for patients, according to Cunningham. Some lab processes for running medical tests have become automated and, as a result, are cheaper and quicker to conduct.

Medical advancements have made many previously complex treatments more routine; with more effective methods, the results can be life-changing for patients.

“We’ve got what I call the spare-parts surgeries — things like knee replacements, hip replacements. People that otherwise would have been crippled…you can get them back on their feet within a matter of days,” Gloria Gutman, an SFU gerontology researcher, said at that institution’s downtown Vancouver campus.

These joint-replacement surgeries, Gutman said, have drastically improved the quality of life for seniors. Although the procedures can be costly, it’s an investment in keeping people active in their communities. “As soon as you get them back on their feet, they’re out there spending money, paying taxes.”

The time a patient spends in hospital after surgery has also been reduced for certain treatments.

“When my father-in-law had his cataracts operation, he was in the hospital for two weeks, lying there with tea bags on his eyelids. Now, it’s done as an outpatient [surgery],” Gutman said.

Getting patients in and out of hospital faster means they can return to their daily activities sooner — which helps maintain their overall health and prevents exposure to other illnesses.

Although research that leads to these improvements is costly, the new methods can save money once in place. Modern cataract procedures have resulted in lower doctors’ fees in recent years, according to Cunningham. If technology can lower health-care costs in some areas, it can balance increasing costs in others.

Although medical advancements are improving the lives of many, this isn’t the only factor contributing to good health.

“From a public-health perspective, we know that many of the determinants of health and well-being lie outside of health care,” Michael Prince, a professor of social policy at the University of Victoria, said during a phone interview.

These factors include housing, financial security, and nutrition. For example, parents earning steady wages can better support their families; children who are well-fed can be productive at school; and seniors with the right assistance — such as home-care workers or nurses or access to public transit — can live in their homes for as long as possible.

But continued funding for social services and ever-improving health care, particularly for the elderly, could result in higher costs for the province, Prince said. “They [politicians] will have to leave the comfortable world of cutting taxes for everybody and [start] thinking about raising taxes again.”

Increasing taxes is never a celebrated solution — and some argue it wouldn’t provide the necessary fix.

“There is a threshold where taxes become counterproductive,” said Colin Hansen, who was minister of health and finance in the Gordon Campbell government. “It’s really about how do you get the best value for the dollars that are there today.”

Whether it’s through collaboration between sectors or finding new uses for technology, Hansen said innovative ideas will be the key to keeping services affordable and reliable.

As health-care providers prepare for more seniors to rely on the sector in the coming years, many private companies are also taking note. With baby boomers aging around the world, businesses and manufacturers are jumping to create products and services to support seniors, SFU’s Gutman said.

An entire industry has developed around “gerotechnology” — technology designed specifically to assist older adults in their day-to-day lives or help their medical practitioners or caregivers.

Some of these technologies are simple, while others go well beyond introducing high-quality cameras and online networks to health-care fields like dermatology. As Gutman described, seemingly futuristic tools such as garments that monitor vital signs are being developed and could be game changers for prevention and treatment.

The health-care system will be able to meet the demands of the future, Gutman said, as long as we have the people and tools: “We have to encourage innovation to meet the service needs.”