This piece was also featured in: The Georgia Straight 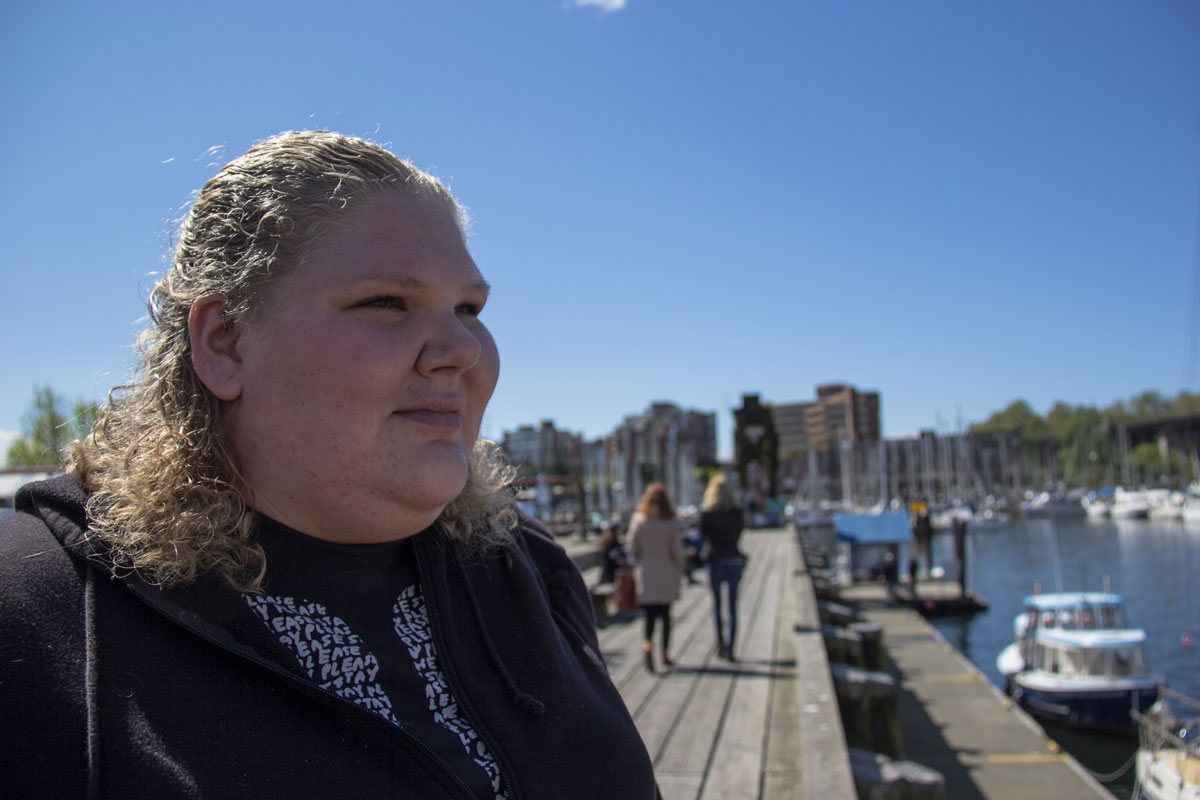 | IMAGE: Laura Benson, 27, speaks out about her struggle with mental illness to inspire others to seek help.

Laura Benson walked along the edge of Granville Island, weaving between many people also out to enjoy a warm April day.

[dropcap]W[/dropcap] ith her blond hair shimmering in the sun as she watched ferries sail by, the 27-year-old showed no sign of the mood swings and depression that have plagued her mind for much of her life.

“It’s been really tough trying to get through my teens and my 20s with this battle with such a dark cloud,” Benson said.

Benson was first diagnosed with depression and anxiety disorder at the age of 13. Despite the diagnosis, she said she felt that psychiatrists didn’t take her seriously and the roots of some of her problems were not addressed.

Yet her experience of mental illness is not uncommon. About 12 percent of girls and young women between the ages of 12 and 19 will experience an instance of major depression, according the Canadian Mental Health Association (CMHA).

To shed light on the differences in how mental illness is experienced, women are the focus of the CMHA’s Mental Health Week, which begins May 5.

For Benson, mental illness left her struggling with its symptoms for years. She practised self-harm, slept in regularly, and barely graduated high school.

At the age of 19, Benson became suicidal and tried to take her own life. “I had just broke up with my girlfriend and I sort of just snapped.”

A few friends thankfully realized something was wrong and called for help. “The police had come and stopped me and taken me to the hospital, and I was hospitalized there for three weeks,” she said.

Not long after, one of the very friends who came to her rescue died by suicide. Benson was devastated. “It made me wonder why can she do it and I can’t, why is she allowed to take her life and I have to be strong.”

Despite the many low points, Benson began gaining control over her conditions. She found a social worker she felt understood her and finally addressed some of her underlying emotional problems such as low self-esteem and body image issues.

Benson was diagnosed with borderline personality disorder — a condition which causes severe and intense emotional swings. With the help of doctors, she figured out better ways to manage mental illness. She now sees her doctor monthly and psychiatrist every three months and has found medication and therapies that work.

“I’ve been doing this for 14 years now, and it’s gotten easier. It gets easier and it gets better.”

Mental illness can affect anyone regardless of their unique circumstance. But when it comes to factors like sex and gender, there are notable differences in the experience of mental illness between men and women.

“There are biological differences of course. Men’s and women’s brains are different, we do know that. But I think equally important is the fact men and women are socialized differently,” said Sarah Hamid-Balma, the mental health promotion director for the CMHA’s B.C. division.

As a group, women are more likely to suffer from mood and anxiety disorders—including depression or eating disorders—than their male counterparts. While 75 percent of suicides involve men, women are three to four times more likely to attempt it, according to the CMHA.

Although it is important not to stereotype people by gender or other social indicators, it is equally important to recognize many factors that put women at greater risk for certain mental illnesses, said Hamid-Balma.

Women and girls are more likely to experience sexual abuse or violence than men and boys, according to the CMHA. They’re also more likely to feel pressures because of financial disadvantages or caregiving responsibilities.

“We know that all of those factors will place a bit more chronic stress on those women,” Hamid-Balma said.

“We tend to think of pregnancy and the time immediately after childbirth as being really happy times, and certainly they can be that way, but women are actually much more vulnerable during the post-partum,” said Jehannine Austin, a professor in the departments of psychiatry and medical genetics at the University of British Columbia.

Genetics are another big player. Those with a family history of mental illness are at a greater risk of developing a disorder.

But genes aren’t a cause on their own. Mental illness, Austin said, can result from the combination of genetic factors and environmental or experiential factors. Genes and the environment are both important.

To help those with a family history of mental illness, Austin also works with a genetic counselling clinic that provides information about preventative action people can take to protect their mental health—including controlling those environmental factors.

It’s no surprise then treatments rely not only on medical intervention but on environmental factors and social supports as well.

Building a network of support

For Benson, her success in managing mental illness has in part come from taking care of her overall health and well-being. She makes sure to get enough sleep, eats well, and finds joy in playing softball.

“I’ve been with the same group of girls for years now and I’ve educated them on the things I go through and they’re very, very supportive,” she said. “Doing something you enjoy is really beneficial when you are feeling low.”

Benson said she has also become more self-aware and knows when to reach out if she’s struggling. Although she’s been hurt by the stigma surrounding mental illness, she continues to speak out by working with the CMHA B.C. and its youth program, Blue Wave.

“You have to really advocate for yourself.”

Resources on where to find help or information about upcoming events such as Mental Health Awareness Week or the Ride Don’t Hide cycling movement can be found through the CMHA B.C.

Those with a family history of mental illness are also encouraged to seek support from the Psychiatric Genetic Counselling Service through B.C. Mental Health and Substance Use Services.

If you are in distress, you can contact the Crisis Intervention and Suicide Prevention Centre of B.C., 24 hours a day, seven days a week.