This piece was also featured in: 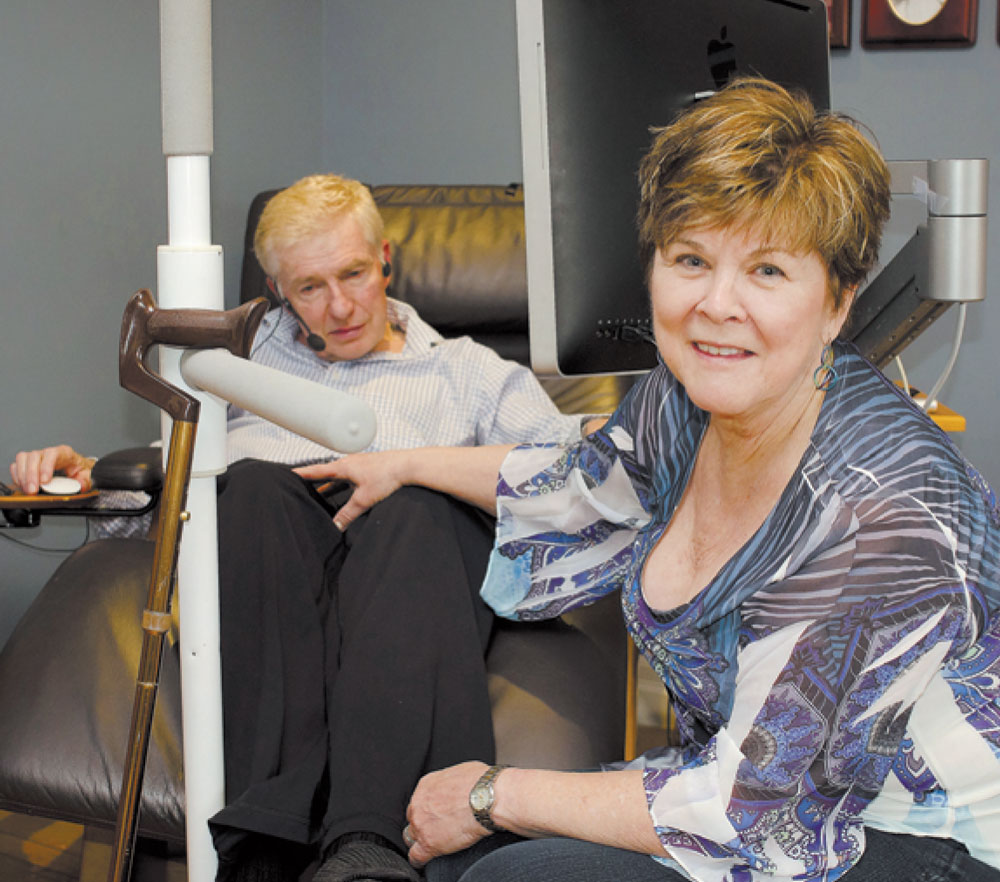 | IMAGE: Phil Thomas, who suffers from Parkinson’s and other degenerative conditions, and his wife Marilyn McCaul urge more choices in end-of-life care, including medically assisted dying.

[dropcap]P[/dropcap]hil Thomas’s medical conditions — Parkinson’s disease, kidney disease and spinal problems — are steadily getting worse.
Already experiencing a loss of mobility, fine motor skills including writing, and his sense of smell, the 70-year-old has begun to think about and plan his death to ensure the quality of life he wants to maintain is honoured.

Working with his wife Marilyn McCaul, 62, his family doctor and a social worker, Thomas indicated what medical interventions he no longer wants that prolong life and those he does want to reduce pain and discomfort.

In the past year, he reduced the number of medications he takes from over 60 pills a day to 31.

Both Thomas and McCaul are members of the Grand River chapter of Dying With Dignity, a national charity that informs people about end-of-life options, provides tools for advance care planning and supports them with their decisions.

The organization also advocates for a change in legislation in Canada regarding medically assisted dying.

The issue of medically assisted dying has gained a great deal of public attention, most recently with Canadian woman Susan Griffiths publicly advocating for her right to die due to her diagnosis of a deadly disease, multiple system atrophy. Griffiths had her wish met to die with medical assistance Thursday at a clinic in Zurich, Switzerland — the only country where the procedure is legal for non-residents.

Thomas and McCaul said they would like to see legislation in Ontario similar to that in Oregon, where terminally ill citizens can voluntarily end their lives with lethal medications prescribed by a physician.

“If Ontario’s laws were the same as Oregon’s, I would consider that as an option,” Thomas said.

“What appeals to both of us in principle is that you have a choice … There’s that sense of if I get to the place where it’s too hard, I know I could be released,” McCaul said.

The couple also supports Quebec’s investigation of amending laws to legalize medical aid-in-dying despite the federal criminal code, but feel a change will not be passed any time soon.

As assisted suicide remains illegal in Canada, the couple are making the best of the decisions available to them.

Although Thomas needs an increasing amount of care, with personal support workers and other medical professionals visiting the home regularly, he said he’s happy with his quality of life now.

Thomas loves music and goes to concerts with McCaul as much as possible.

The former chemistry teacher also discovered his artistic talent through classes offered at the Alzheimer’s Society. He now paints, makes pottery, designs cards and edits photographs on a computer set up to accommodate his physical limitations.

Thomas still shares his wonderful sense of humour with McCaul and friends.

“I was at the door when the bus came up … and I could hear this raucous laughter that was so loud,” McCaul said about Thomas joking with the driver of the Kiwanis mobility transit service when he was dropped off Thursday afternoon.

Thomas hopes he doesn’t have to contend with a time when he can no longer share a laugh with someone.

The current draft of Thomas’s advanced directives state that he wants “minimal intervention with no invasive diagnostics, as the choice has already been made not to treat.” He has a do-not-resuscitate order in place with his doctor.

Thomas said he also wants to stay at home as long as possible, rather than enter long-term care or a hospital.

Having these wishes clearly outlined provides some relief to McCaul, who may be left making hard medical decisions as Thomas’s power of attorney if he no longer has the capacity to do so.

“I have a map that spells out to me I know what Phil would want,” she said. “I think I would be supported in the difficulty of making a decision knowing that I was honouring what was really, really important to the person that I love.”

However, his wishes, depending on how they’re carried out, leave McCaul with difficult choices.

Having experienced a few instances where several of his ailments were acting up simultaneously to cause physical and emotional distress, Thomas decided he will stop eating and drinking, rather than tolerate great suffering or loss of quality of life.

It’s not ideal and a difficult death to imagine, Thomas said, but it’s the only legal option.

With power of attorney, McCaul may be the one to actually make the decision to withhold food and drink if Thomas can no longer articulate the wish himself.

The couple hope they won’t reach that point — but it in the event they do, they at least have a plan.

“You always have to have a Plan B or a Plan C,” McCaul said.

For Thomas, he also has the peace of mind his wishes will be honoured.

“I see the prospects of what can be down the road,” Thomas said.